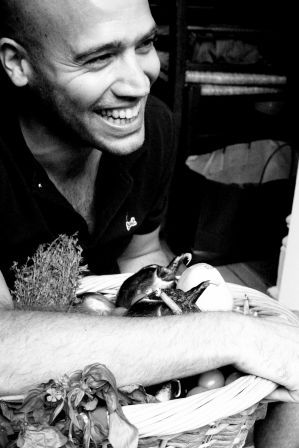 This is a cook at once charming and bubbly with lots to share! Energetic and very much at ease in the kitchen since childhood. Stefano Faita teaches his tricks at the Mezza Luna Cooking School, a friendly place of learning he founded with his mother Elena Faita. In 2007 he published his first cookbook Entre Cuisine et Quincaillerie, which was an instant hit. He then published a second in 2009 called Entre Cuisine et Bambini. In 2011, he published his third cookbook Je cuisine italien .He had for four years his own cooking show ”In the Kitchen with Stefano” . Now is the co-owner with Michele Forgione of the restaurant Impasto and the pizzeria Gema. Since December he also co-owner of the casse-croûte Chez Tousignant.

Family dinner with Stefano and Elena